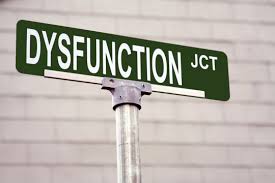 Another way to understand this model is to take the opposite approach – a positive one – and imagine how members of truly cohesive teams behave: